Rain, rain, go away and come again another day!  It seems like this year the Crusader baseball faithful have been singing that song a lot.  Bad weather has already postponed several games but brighter days will hopefully be here soon.  Coach McMillan states, “I just want to be able to get out and play.  If we can’t get on the field, it’s tough for us to develop our young team and get better.”  The Crusaders are itching to get on the field more next week!  NCA lost the varsity baseball season opener against PAC at home 7-5 on Monday night but the feeling is still strong that this season has the potential to be very positive in year two of the Bob McMillan era.  Charlie Compton returns this year as a junior that brings a lot of pop at the plate which was evidenced with his two run homer in the first game.  Compton who bats in the 3 or 4 hole of the lineup plays centerfield and pitches.  Freshman Robert McMillan has really come into his own after having a successful 8th grade season on the varsity squad last year.  McMillan plays 3rd base, shortstop and is an instrumental part of the pitching rotation.  Joey McRoberts and Andrew Walke are the two seniors of the club and both of them are hoping for a big final year wearing the red and black.  McRoberts plays 1st base and pitches, while Walke plugs in anywhere in the outfield as well as 3rd base.  Many of the Crusaders players play multiple positions as needed while Coach McMillan seeks to put the pieces of the puzzle together on any given night.  After missing the playoffs last year, the Crusaders hope to make it to postseason play this go round but they will face a tough region schedule.  Luke Cochran (catcher) and DavidLee Clamp (shortstop/pitcher) are a couple more freshman that figure to make a big impact on this young Crusader team.  “With all the rain we’ve had, we are going to be playing many games the second half of the season in a short timespan.  Hopefully our pitching will be able to hold up and we will get contributions from a lot of our young guys,” stated McMillan.  Max McKenna and Landon Buice are two others that McMillan mentioned as vital this season to provide depth on the pitching staff. The Crusaders will possibly be back in action tomorrow at home against Greenwood Christian, pending the field condition after today’s rain. 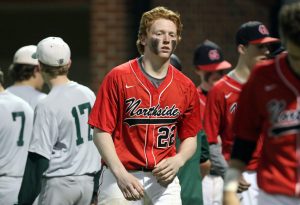 Joey McRoberts above is in his final campaign.