The last 48 hours for the Varsity Boys Basketball team at Northside Christian have been in summary, simply amazing.  The Crusaders have knocked off Lexington School District One’s Pelion High School, a 3A public school and Wilson Hall, a 3A SCISA school that is one of SC’s largest private schools.  Both games ended in dramatic fashion!

On Thursday night, Pelion led for the vast majority of the ballgame but NCA never gave up.  Jeb Reiser had a phenomenal game in scoring 24 points to lead the Crusaders in a second half comeback after trailing by 10 at the half.  After a Reiser 3 cut the Panthers lead to two points late in the game, the Crusaders got the ball back with less than 20 seconds to play.  Coach Harman drew up a play for Reiser to get a ball screen at the top of the key but Reiser’s shot was blocked with 8 seconds remaining.  Northside was forced to foul trailing by 2, and the outcome looked very bleak for NCA.  After being defended well by the Crusaders for 4 straight inbounds plays, the Panthers needed one more successful inbounds pass to make the Crusaders use a 7th team foul that would have put the Panthers in the free throw bonus.  After a Coach Harman timeout, NCA defended the final inbounds pass perfectly and it was intercepted by Cory Black.  The senior quickly dribbled down the court and missed a baseline shot that rolled directly into the far corner of the court.  Brayden Ross was then in the right spot at the right time as he picked up the ball in the corner and shot the ball from beyond the arc.  The ball sailed through the bucket as time expired and the Crusaders emerged victorious!  “I was most impressed with our resiliency in defending so many inbounds plays over and over again at the end of the game.  Without those defensive stops, the final steal by Cory and shot by Brayden wouldn’t have been possible.  It just goes to show you that it takes a total team effort to win games,” stated Coach Harman. 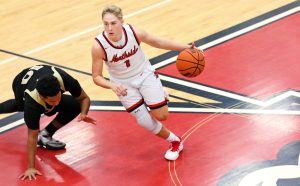 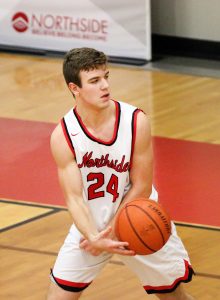 Jeb Reiser breaking down the Pelion defender.  Ian Black is providing a lot of energy and gaining solid experience as a Freshman.

At Wilson Hall last night, the Crusaders played in front of a raucous crowd against a tough Barons varsity boys team.  The Crusaders and Barons went back and forth in the first half with the Barons leading by 5 points at the half.  During the 3rd quarter, Wilson Hall got rolling led by #31 Evan Heffman’s game high 20 points.  The Barons led by as much as 13 points, 47-34, early in the 4th quarter.  The Crusaders then got momentum with several quick steals out of their 1-2-2 half court zone press.  Reiser led the way with 16 points and several critical 3 pointers for the Crusaders, but several others from Northside stepped up big in this one.  Charlie Compton added 12 points and a handful of critical rebounds, while James Wagoner added 11 points off the bench.  The hustle though from players like Cory Black, Andy Gwyn and Thomas Kodman added the secret sauce that the Crusaders needed for the comeback to be possible.

The Crusaders, now 4-3 on the season, have played in 5 games that have been decided by 4 points or less.  Northside has won 4 of those 5 contests in what has been a tough non conference schedule.  Coach Harman stated, “These last 2 games have probably been the most satisfying wins in my Northside head coaching career.  The grit and determination by these young men has been incredible.  I am super proud of everyone on our team and coaching staff.”  The varsity boys will now play at St. John Paul Catholic School in Beaufort, SC on Monday night followed by one final game before Christmas break at home against cross town rival Ben Lippen next Friday, Dec. 20th. 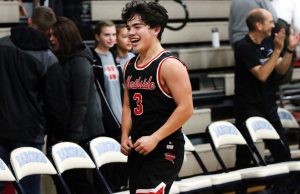 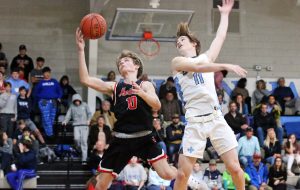 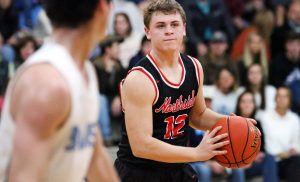