The Northside Christian Varsity Football team garnered their first win of the 2019 season in dominating fashion over Newberry Academy on Friday night, 34-14.  After a tough home opener against Richard Winn that resulted in a couple NCA injuries, Coach Bell and the Crusaders came out with a renewed sense of life against the Eagles! Despite the weather delay, the Crusaders controlled the game from the opening kick and were focused on making sure Newberry never got into an offensive rhythm.  Northside Quarterback Max McKenna was sensational in the game hitting on 19-23 passes for 186 yards and 2 TDs.  McKenna also rushed for 159 yards, accounting for 345 yards of total offense.  Charlie Compton was consistent as always registering 6 receptions for 75 yards and several key tackles on defense.  At the end of the first quarter, NCA led 14-6 and by the half the Crusaders had increased their lead to 20-6.  You could tell at that point it was probably going to be NCA’s night.  Joey McRoberts joined the football team at the beginning of the week and provided the Crusaders with a much needed shot in the arm with his contagious energy (6 tackles) and senior leadership!  Junior Brayden Ross was instrumental throughout the contest with 8 receptions and 2 huge interceptions, one of which was a pick 6 touchdown in the 2nd half!  You could hear Ross yelling at Assistant Coach, Greg Cauthen, “I’m ready for my steak dinner” after the interception that led to his 4th quarter TD.  Senior Andrew Walke came back from his injury last week and still showed no fear as he put his body on the line with 7 key tackles on defense.

On his team’s effort, Coach Bell stated, “It was huge for us to stay the course and get the win.  I am super proud of our kids and know that we are going to get there.” Charlie Compton added, “We were able to put the previous weeks behind us and come out ready to play. We knew this week we had Joey dressing out and that gave us energy.  It was a total team effort, and I thought particularly Brayden gave us a great lift in the secondary following the instructions of Coach Cauthen.”

The Crusaders will again play at home this Friday night against Patrick Henry in what should be another very competitive game of two evenly matched teams.  Kickoff is slated for 7:30pm. 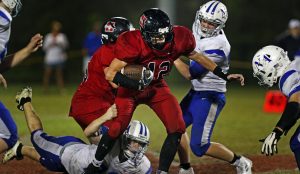